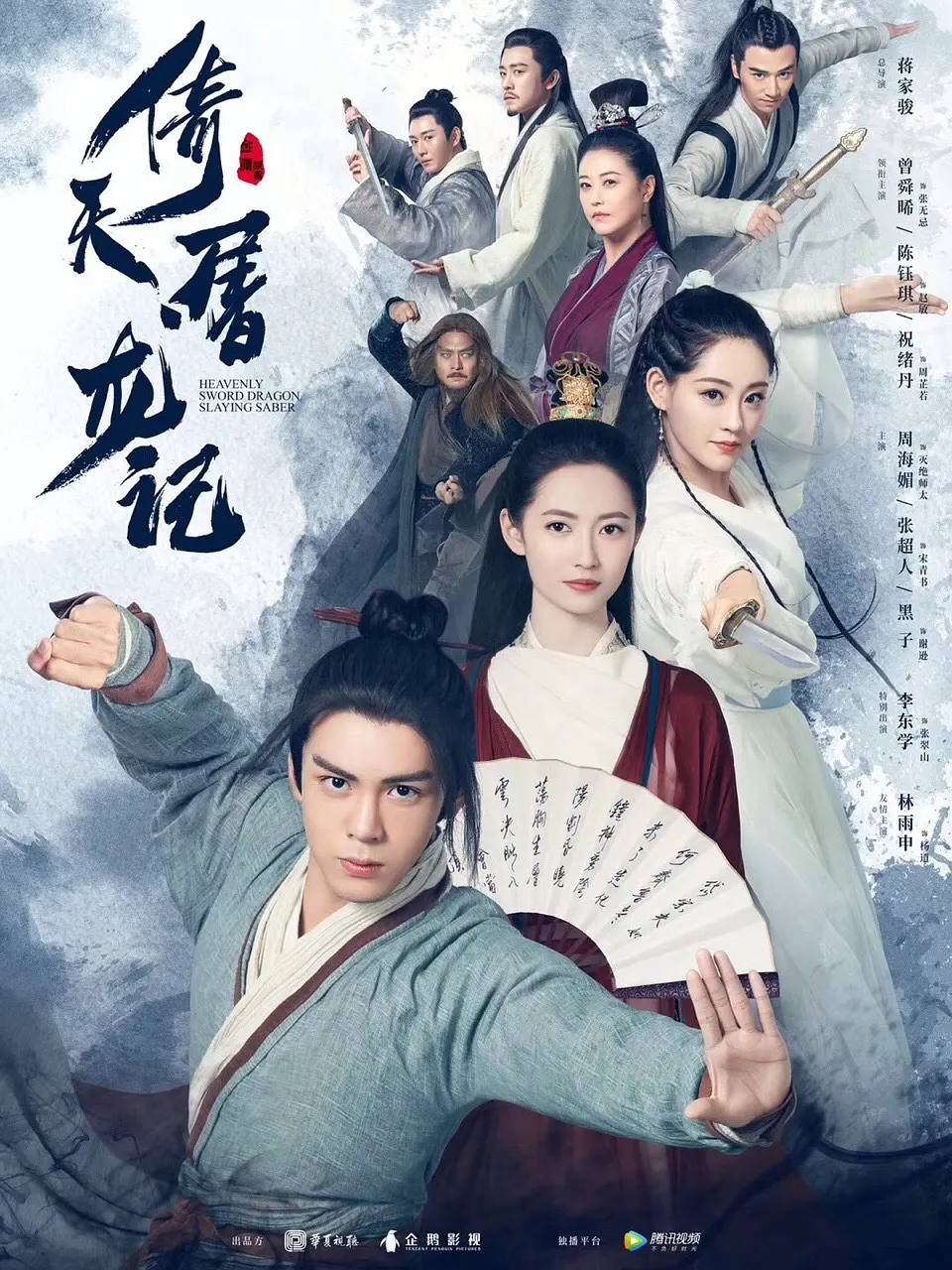 I finally watched it!! I’ve been meaning to catch up on some shows that I missed, and I now have the time to do it, at least for the time being! ^_^

Heavenly Sword and Dragon Slaying Sabre (HSDS) 2019 is the latest adaption of Jin Yong’s famous wuxia novel of the same name. HSDS is the third and final novel in the Condor Heroes trilogy series. Unlike the first two books which features reoccurring characters and is set in the Song Dynasty, HSDS has a new set of characters and takes place in the later part of the Yuan Dynasty.

In HSDS, the protagonist is Zhang Wuji, the son of a Wudang disciple and Ming Cult follower. Zhang Wuji grows up on an isolated island with his parents and god-father, Xie Xun. When he was a child, his parents committed suicide due to pressure from the prominent sects in order to protect Xie Xun. After his death, Zhang Wuji encounters a series of events that leads him to finding the Nine Yang Manual and he is able to master its skills and become a profound martial artist.

Upon returning to the pugilist world, he reunites with old friends and family members and encounters various enemies. He eventually becomes entangled in a love triangle between Zhou Zhi Ruo of the Emei Sect and Princess Zhao Min of the Yuan Dynasty. He also becomes the new leader to the Ming Cult and ends up leading a rebel force against the corrupt government. With his new responsibilities and emerging feelings conflicting, Zhang Wuji often finds himself in sticky situations. But, nevertheless, his honest personality and chivalrous heart helps him overcome these obstacles and let him stay true to himself…

Like a typical wuxia novel/drama, HSDS has a lot of characters. But I’m just going to list the three main characters. For a list of all characters from the novel check here. 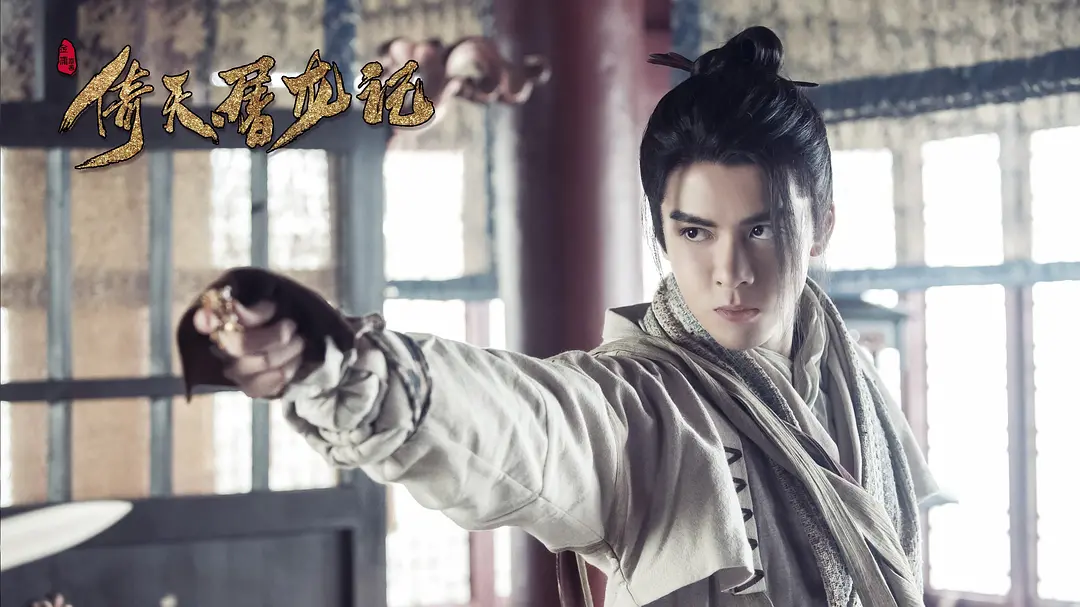 Zhang Wuji (张无忌), Zeng Shun Xi
The main protagonist. He is the son of Zhang Cui Shan and Yin Su Su. He is an honest man with pure and kind heart. Due to this, he easily wins over the hearts of many and, combined with his renowned martial art skills, he was able to become the Ming Cult leader. But despite his high status, Zhang Wuji only wants freedom and the ability to live a carefree life isolated from the chaotic pugilist world. 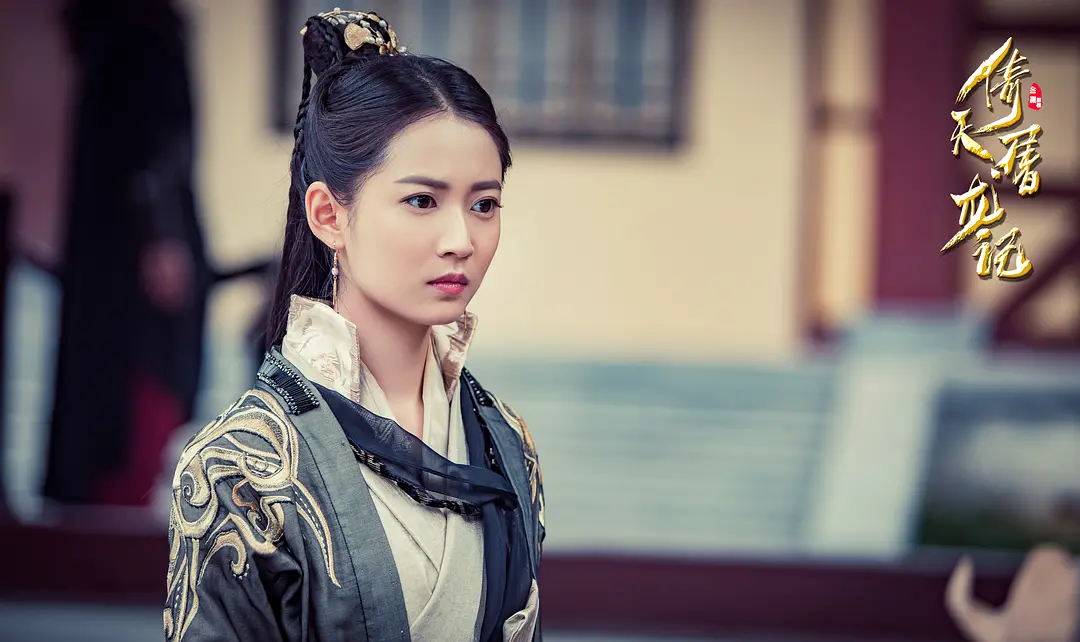 Zhao Min (赵敏), Chen Yu Qi
A princess from the Yuan Dynasty. She gets orders from her father to get rid of the pugilists who rebel against her kingdom, which includes Zhang Wuji and his comrades. Due to her sly nature and ruthless manner, Zhao Min easily captures, kills, and becomes enemies with the Han Chinese pugilists. But, although an enemy at first, Zhao Min is eventually smitten by Zhang Wuji’s heroism and chivalry and ends up giving up her status and mission in order to follow him. 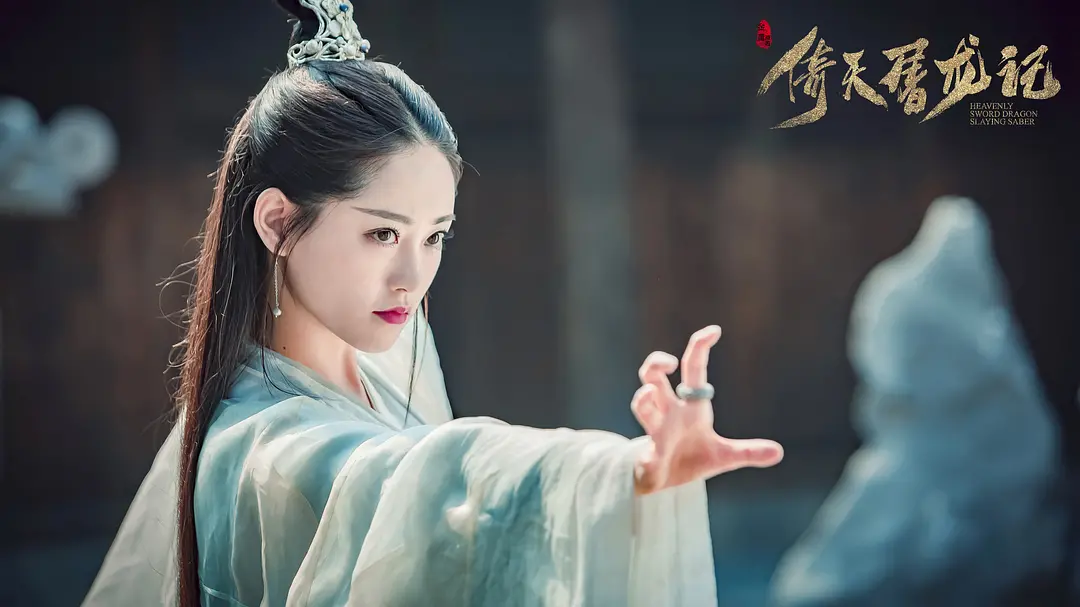 Zhou Zhi Ruo (周芷若), Zhu Xu Dan
An orphan saved by Zhang Wuji and Zhang Sanfeng from childhood. She becomes a disciple at Emei Sect under Priestess Miejue. She, along with Zhao Min, falls in love with Zhang Wuji. But her master’s orders and hatred towards Zhang Wuji makes her hesitant in pursuing her feelings for him. However, Zhang Wuji’s rejection of her feelings later on fuels her anger against him and turns her into a cold and cruel woman. 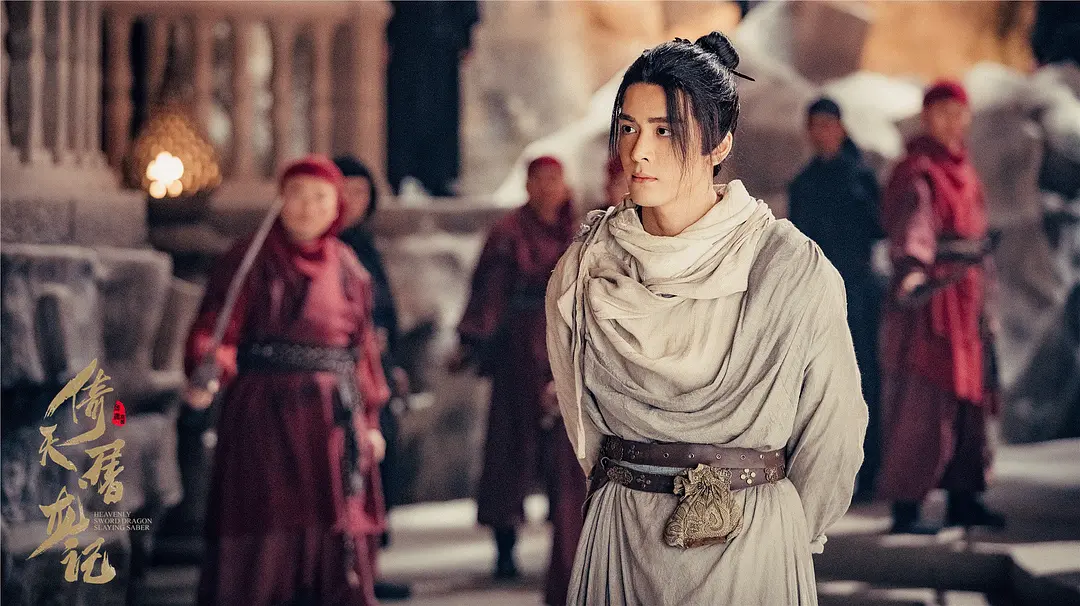 First of all, I just have to say that HSDS is probably my least favorite of all of the three books in the trilogy. The main reason why is because I do not like Zhang Wuji. Needless to say, compared to Guo Jing and Yang Guo, Zhang Wuji is kind of inferior to them. And this is mainly because, in my personal opinion, Zhang Wuji is a very undecisive, easily manipulated, and naïve person. Although he and Guo Jing share similar characteristics in their naivety and innocent personality, there is actual growth in Guo Jing throughout the novel. Plus, we get to see how he becomes a hero through his adventures with Huang Rong (and also how she really is the reason why he becomes the hero that he is). But Zhang Wuji doesn’t really have the growth spurt that Guo Jing has, and he isn’t an interesting character compared to the haughty Yang Guo (who we can’t help but adore). And what I absolutely hated [didn’t like] about him is that he was constantly leading on Zhou Zhi Ruo and Zhao Min. Both women are very much in love with him and actually did a lot for him. But when it comes to him, Zhang Wuji actually falls short on how much he compromises and sacrifices for either women. 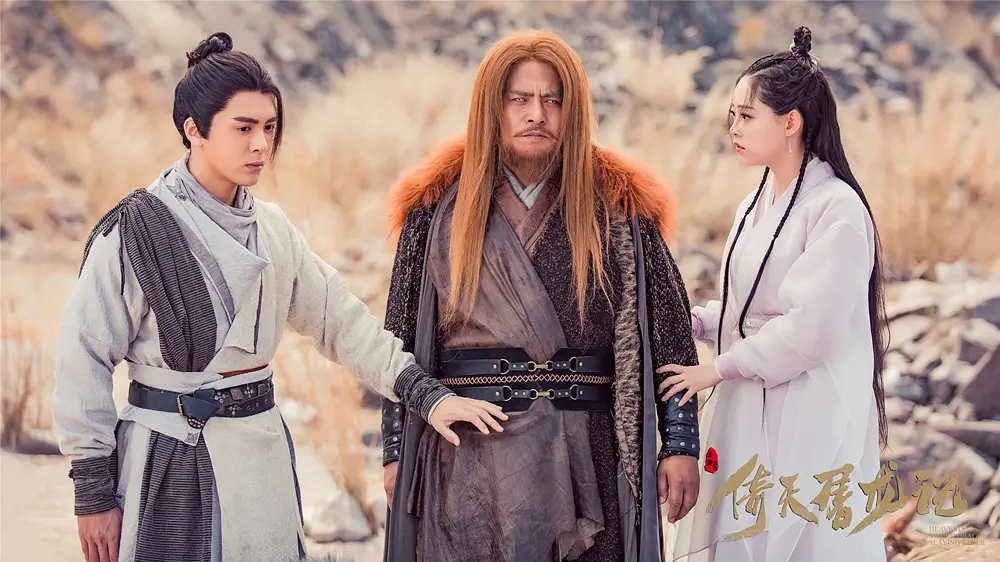 Anyway, did you know that HSDS 2019 actually had a lot of complaints during its airing? Aside from people not liking Zeng Shun Xi as the titular character, people were also complaining about the poor action scenes. I, however, found Zeng Shun Xi to be quite a charming and youthful Zhang Wuji. Zeng Shun Xi may not have the looks to be Zhang Wu Ji, but who cares! It’s the acting that really counts. I mean, Deng Chao as the previous Zhang Wuji wasn’t ideal, but he pulled it off quite well, right? I’ll admit that I was initially skeptical of Zeng Shun Xi as well. I mean, he’s young and is still new the acting world. Plus, he definitely needs to work on his acting skills. But I think he didn’t do so bad. The only cast member that I had a problem with was Zhu Xu Dan, who I felt wasn’t pulling it for me as Zhou Zhu Ruo. And this was pretty disappointing because I was looking forward to her (as I quite like her). But I just couldn’t get into her character at all. Her looks were spot on, but her acting was just not doing it for me.

As how the drama compares to the novel, there are definitely some minor differences that occurs throughout the drama. For example, the ending. In the novel, Zhao Min requests Zhang Wuji to draw her eyebrows (which is literally the ending), but the drama differs from this ending. I’m not complaining about the ending though. I felt it was done quite well and was a good fit as the ending for the drama. I’m not disappointed in it, but I do think it was rather rushed. But whatever, it was a happy ending. 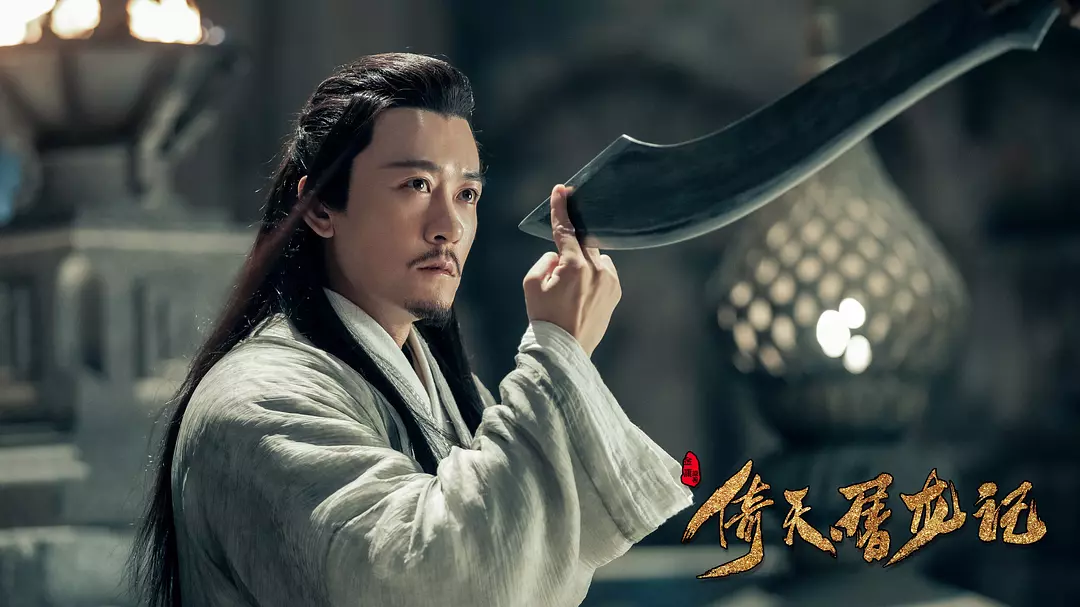 Another cool thing that the drama did, which I was fond of is the focus on its supporting cast. I’m specifically referring to Yang Xiao, Ming Cult’s left-hand man. I mean, he drew a lot attention from netizens from his forbidden romance with Emei Sect’s Ji Xiao Fu and his fatherly love towards his daughter, Yang Bu Hui. But Yang Xiao wasn’t the only one who I paid attention to. Lots of the support cast were either veterans or have portrayed characters in past dramas that I watched. The most notable cast member that many fans would pick out would probably be Kathy Chow. Kathy Chow is a HK actress who also once portrayed Zhou Zhi Ruo in an earlier adaption of HSDS. Her portrayal of Zhou Zhu Ruo is actually one of the most iconic throughout all of the HSDS adaptions. She really set the bar for future actresses as Zhou Zhi Ruo. And if you compare Zhu Xu Dan’s Zhou Zhi Ruo to Kathy Chow’s, you can actually see some similarities in their styling. 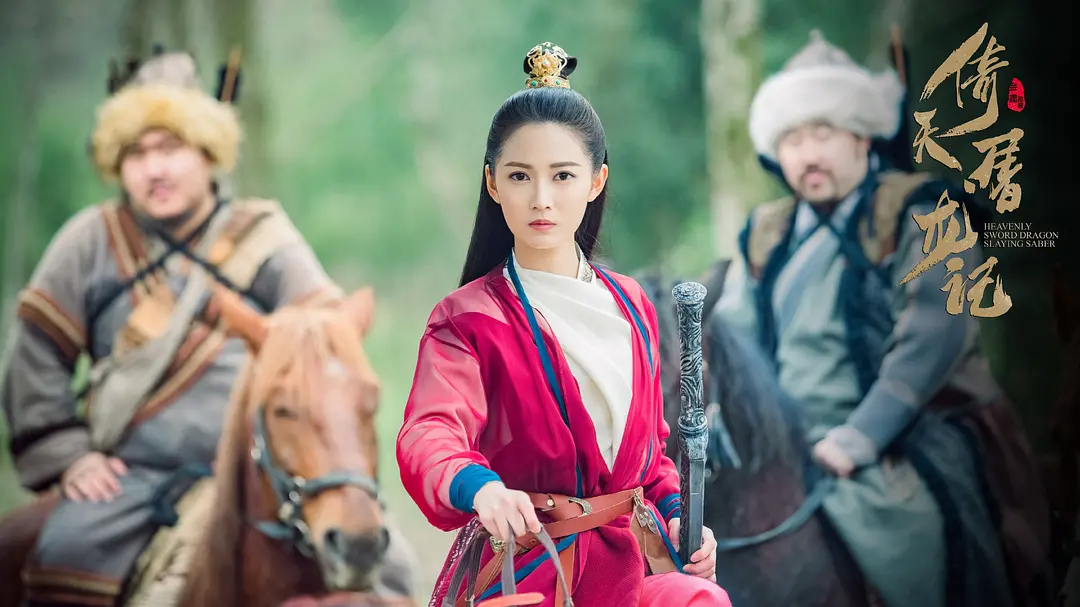 Before I finish, I just want to give a shout out specifically to Zhao Min. She is often overshadowed by the other two female leads of the Condor Heroes trilogy, Huang Rong and Xiao Long Nu (both who are very popular among fans). And I think she definitely deserves to shine. Zhao Min is fairly similar to Huang Rong in where they’re both extremely intelligent and competent women. However, unlike the sweet and innocent Huang Rong, Zhao Min is cruel and ruthless. She grew up in the royal family and is thus expected to kill her enemies without remorse. And this is were I personally think she’s a tad bit better than Huang Rong, in terms of being a strategist. Although Huang Rong is very intelligent in her own right and she is good at coming up with tricks, she lacks the ruthlessness that Zhao Min has. Huang Rong is kindhearted and would probably rather save people, but Zhao Min understands that sacrifices are necessary and everything must come with a price. And Chen Yu Qi’s portrayal of Zhao Min was actually to my liking. She has the haughty look, and that made her an appealing Zhao Min. Plus, she also rocked the cruel mannerism that Zhao Min has. I think the production team made a good decision in letting her portray the female lead. I definitely wasn’t disappointed in Zhao Min in this drama. 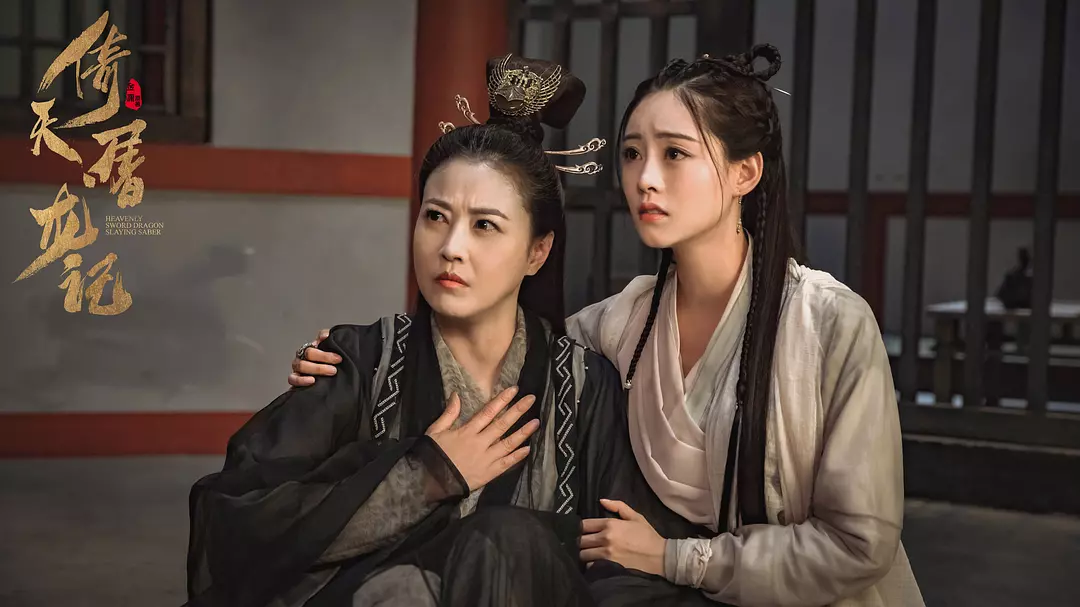 Overall, I quite enjoyed this drama more than I thought. I was very skeptical of it, but I decided to go for it since I’ve finished watching Joy of Life and needed a new drama to watch. And I’m kind of glad I did because I did like this drama. It’s definitely not the most accurate portrayal of the novel, but its depiction is fairly good, especially because of the supporting cast. And the romance in this drama is fairly more prevalent than usual. In the 2009 version of HSDS with Deng Chao and Ady An, I was disappointed with the little romance it had. Even though that drama was more in tune with the novel, I still wanted some romance between the leads. And this version of HSDS has plenty of romance, especially during the later part of the series (last 10 episodes!). Although Chen Yu Qi and Zeng Shun Xi’s chemistry isn’t the most sizzling, they are cute together. But definitely do keep an open mind when you’re watching the drama. Again, it doesn’t really align with the novel and there are quite some differences. But I think it’s still worth watching!