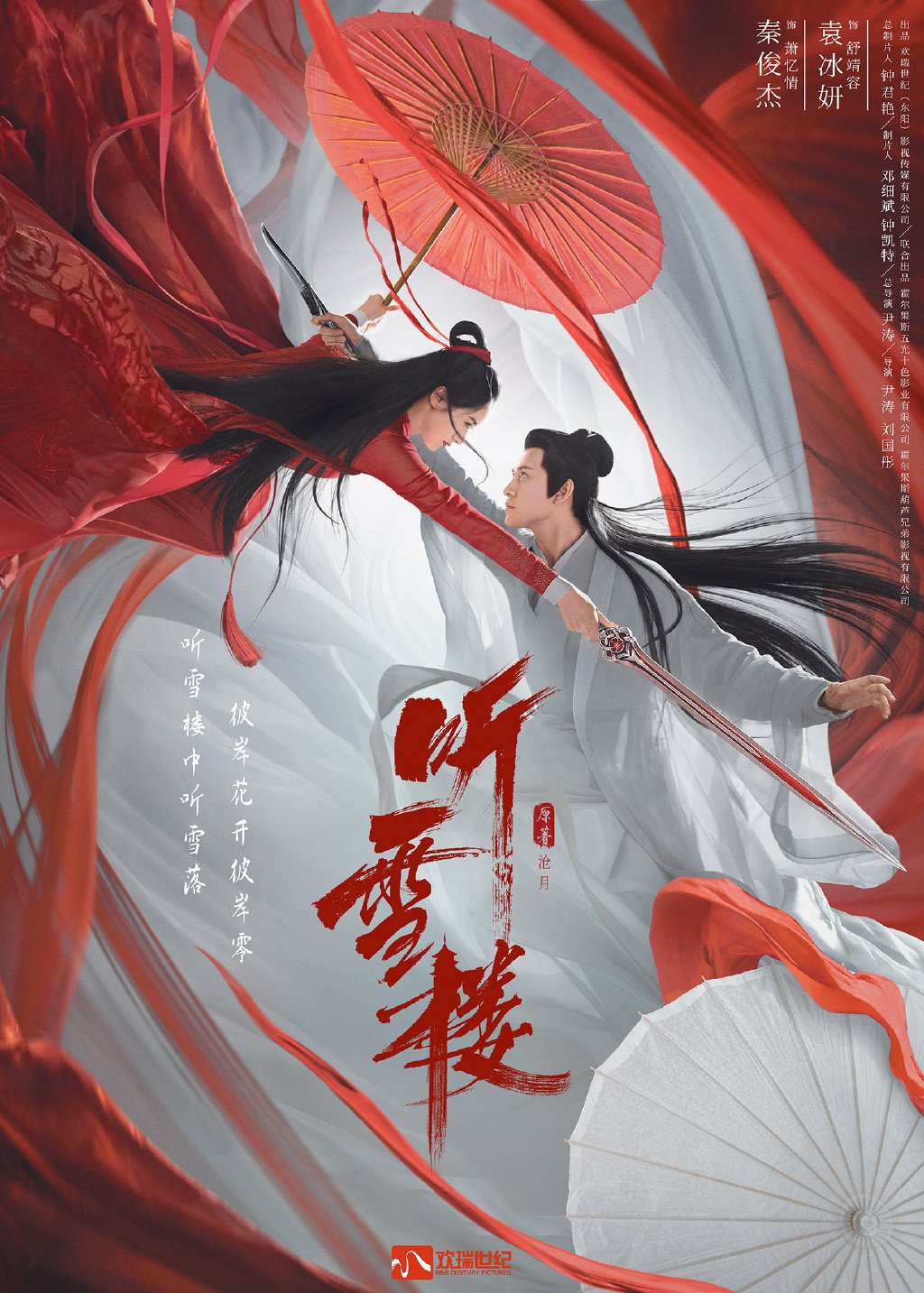 I’m not the biggest fan of both Qin Jun Jie and Yuan Bing Yan, but the trailers for the drama was really good and that’s why I decided to check out. 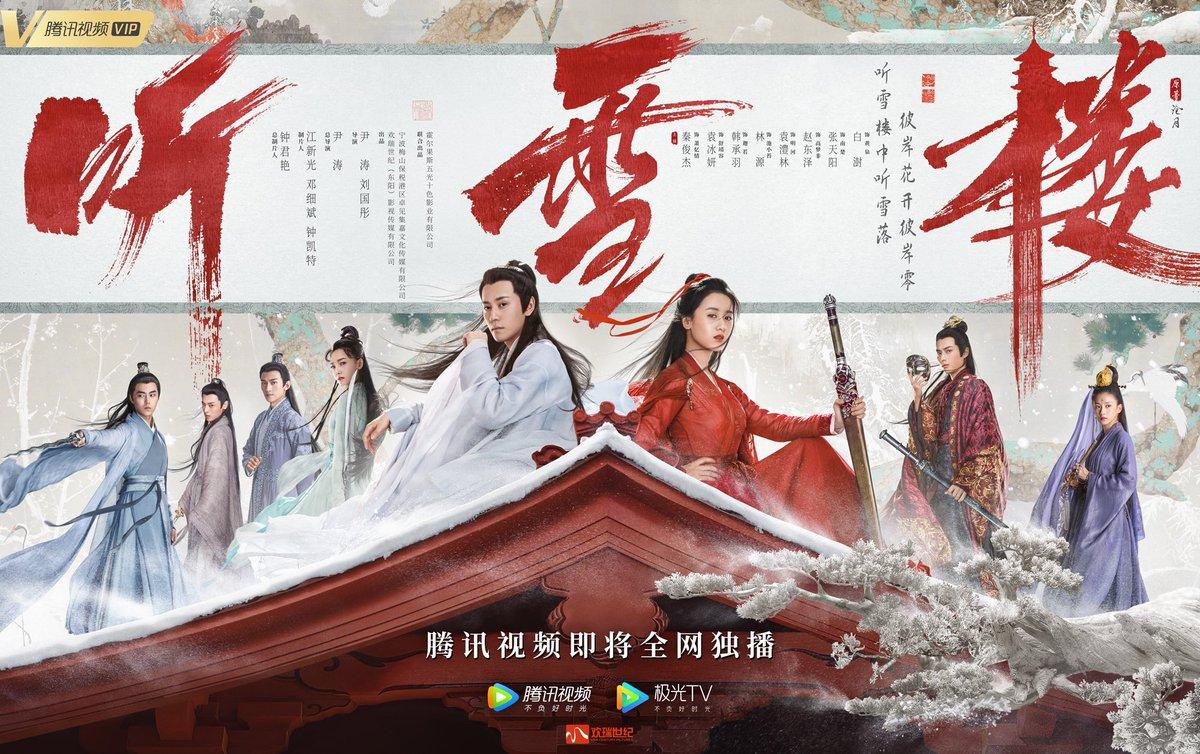 The trailers for the drama looked very good! A lot of people have said that it reminded them of old-school wuxia, especially the fight scenes. And when I was watching it, I totally agree. Dramas these days are all about CGI, and while I know that using more CGI means less fight scenes where people could get injured, it was nice to see good quality action scenes in the trailers. It was very nostalgic!

In order to fight against the unorthodox Bai Yue Sect, Xiao Shi Shui, leader of the Ting Xue Tower, gathers a group of heroes to fight with him. Bai Di, Xue Gu, and Xue Mo, all who are close friends from Xiao Shi Shui and masters of their own martial arts decide to join him and help him fight. Together the group of men are able to evenly match against the Bai Yue Sect that is being led by the powerful female ruler, Hua Lian. However, neither side wins and the battle carries on.

One day as Xue Mo returns home to his daughter, Shu Jing Rong, his house is raided by the Bai Yue Sect, who targets him first. Xue Mo is easily outnumbered and kills himself after being controlled by Hua Lian and ordered to kill his daughter. Shu Jing Rong is saved by Xiao Shi Shui and his men who arrive too late to save their friend.

Xiao Shi Shui offers Shu Jing Rong to return to Ting Xue Tower with him and become a member, but she refuses because she doesn’t trust him. She takes her father’s sword and kneels for a while night besides her parents grave. During this time, Xiao Yi Qing, the young master of Ting Xue Tower and Xiao Shi Shui’s son, accompanies her and patiently kneels alongside her. His patience and kind heart touches Shu Jing Rong, but his illness suddenly appears and they are both taken to Sand Valley where Bai Di and Xue Gu are.

At Sand Valley, Xue Gu uses half of his powers to save Xiao Yi Qing, who is his disciple. Shu Jing Rong also meets Qing Lan, the eldest disciple of Bai Di, and is saved by him when she tries to commit suicide. After she is saved, he asks her to stay in Sand Valley. Bai Di then offers Shu Jing Rong to be his student and tells her father had once stayed in his valley to train himself in his martial arts. Shu Jing Rong decides to accept Bai Di’s offer if Bai Di promises to train her in martial arts. Bai Di tells her he will help her learn to protect herself and gives her the name Qing Ming.

Xiao Yi Qing has returned to Ting Xue Tower after being gone for a decade because he needed to recover from his illness. He finds that the entire sect has been taken over by his father’s right-hand man, Mai Qian Cheng. Unlike ten years ago, Ting Xue Tower has gradually declined and is not as strong as it used to be…

And that’s a wrap! Watch more to know what happens! 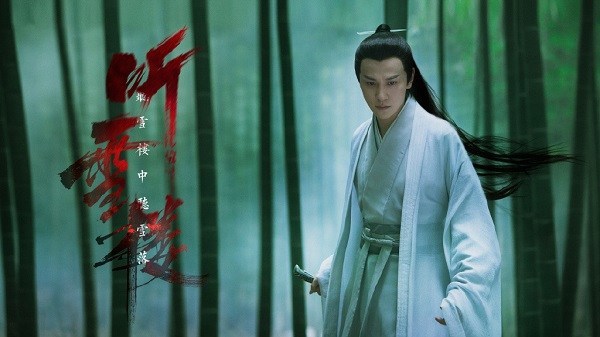 Xiao Yi Qing (舒靖容), Qin Jun Jie
Son of Xiao Shi Shui. He is the Young Master of the Ting Xue Tower. He was born with the mysterious Jue Yin Disease and has a sickly and weak body, but he has very high martial arts skills and is ruthless towards his enemies. 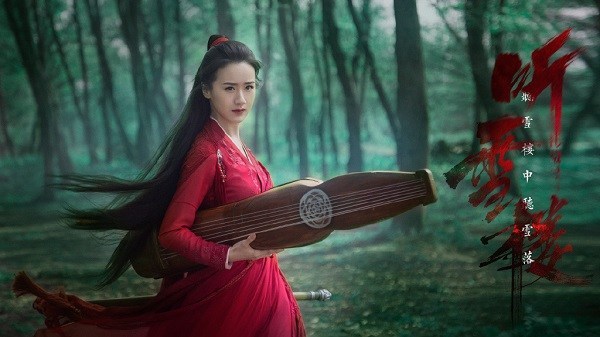 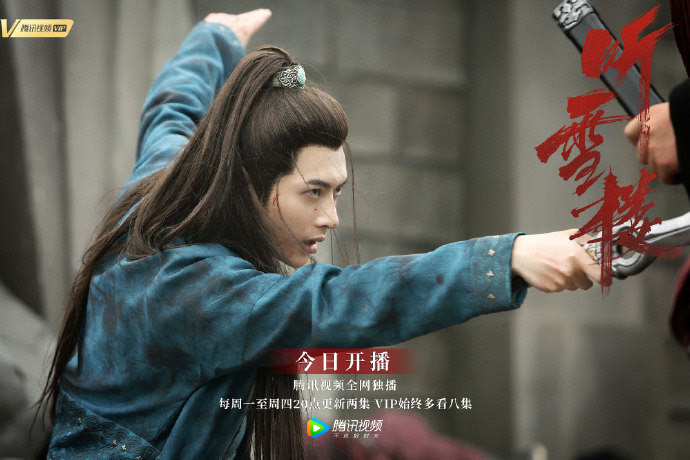 Qing Lan (青岚), Han Cheng Yu
Eldest disciple to Bai Di. His is responsible and mature and is overprotective towards Shu Jing Rong. 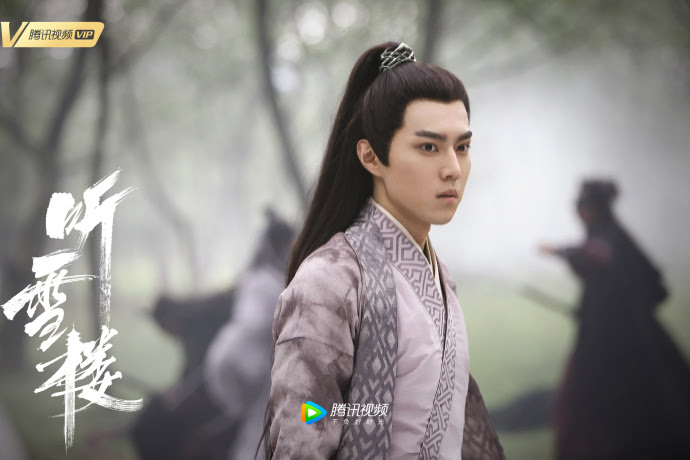 Qing Yu/Gao Meng Fei (青羽/高梦非), Zhao Dong Ze
Second disciple to Bai Di. He has a playful personality and is always getting himself in trouble, but both his master and Qing Lan tolerate him. 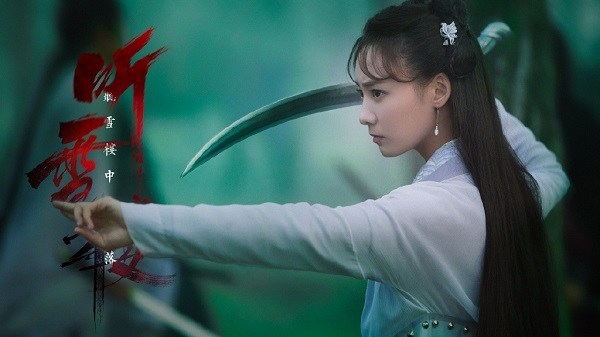 Chi Xiao Tan (池小苔), Lin Yuan
Daughter of Xue Gu. Younger martial sister to Nan Chu and Xiao Yi Qing. She is childish and playful and is always at odds with Qing Yu. 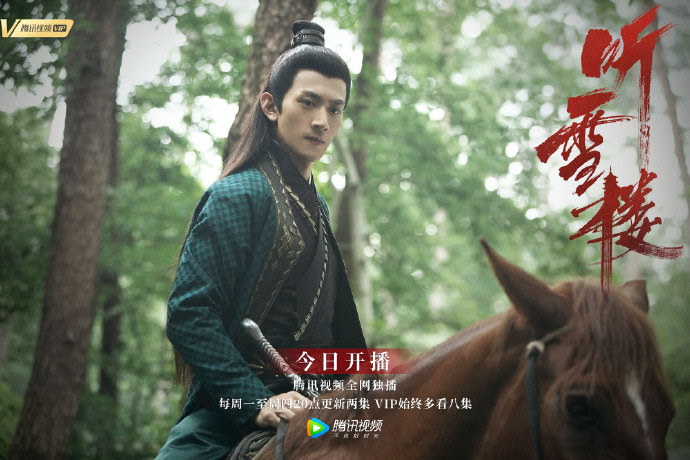 Nan Chu (南楚), Zhang Tian Yang
Eldest disciple to Xue Gu. He is mature and quiet. He acts as the personal bodyguard to Xiao Yi Qing. 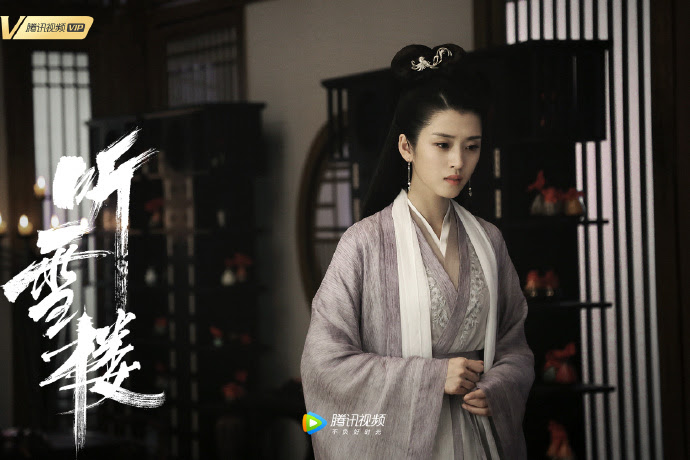 Zi Mo (紫陌), Li Ruo Jia
A woman who was saved by Xiao Yi Qing. She becomes a member of Ting Xue Tower and is loyal to Xiao Yi Qing. 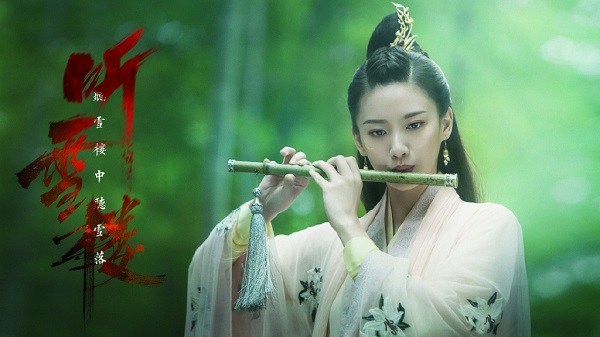 Ming He (明河), Angela Yuan Li Lin
Daughter of Hua Lian and the Young Miss of Bai Yue Sect. She is in love with Qing Lan and schemes to overthrow her mother.

I’m going to be brutally honest. I truly, truly do not like the female lead in this drama. I don’t find her interesting and she doesn’t stand out at all to me. The first reason is probably because of the actress who portrays her, Yuan Bing Yan. I’ve seen her in several dramas before (Ever Night, The Taoism Grandmaster, The Legend of Flying Daggers), and I didn’t find her acting that bad, but she wasn’t the main female lead so I didn’t have much of an impression of her. And now that she’s the female lead of this drama, I am not feeling her at all. Her acting is weak and it just feels very flat. The other reason why I’m not liking Shu Jing Rong is just because of how her character is written. Not only is there lack of character development for her, but she just doesn’t stand out at all. Compared to the other female characters, she’s boring and not interesting. Not only that, but she’s always getting “saved” by everyone. If it’s not the male lead, then it’s one of her senior brothers. It’s a turn off for me and I expected more from her, especially if she is a disciple of Bai Di and learned martial arts. It’s really disappointing…. Honestly, I find myself skipping all of her scenes now

I’ll just admit that the two main leads aren’t interesting at all. Qin Jun Jie is definitely a much better actor that Yuan Bing Yan, but I don’t like his male character one bit. Xiao Yi Qing was much better when he was kid. He was kinder and gentler towards Shu Jing Rong. Now that he’s an adult, all he does is calculate and kill people. He’s ruthless and has no regards towards people who aren’t useful to him. Yes, he has be a strong leader for Ting Xue Tower, but I feel like he’s unable to know how to comfort people when he is trying to comfort them. He always goes for the tough love plus silent love approach, especially towards Shu Jing Rong, who he obviously has feelings for yet wants her to “grow up” first before he lets her stand by his side. It’s like he’s grooming her to be the perfect partner for him. Like, dude, you’re not her dad or her master! 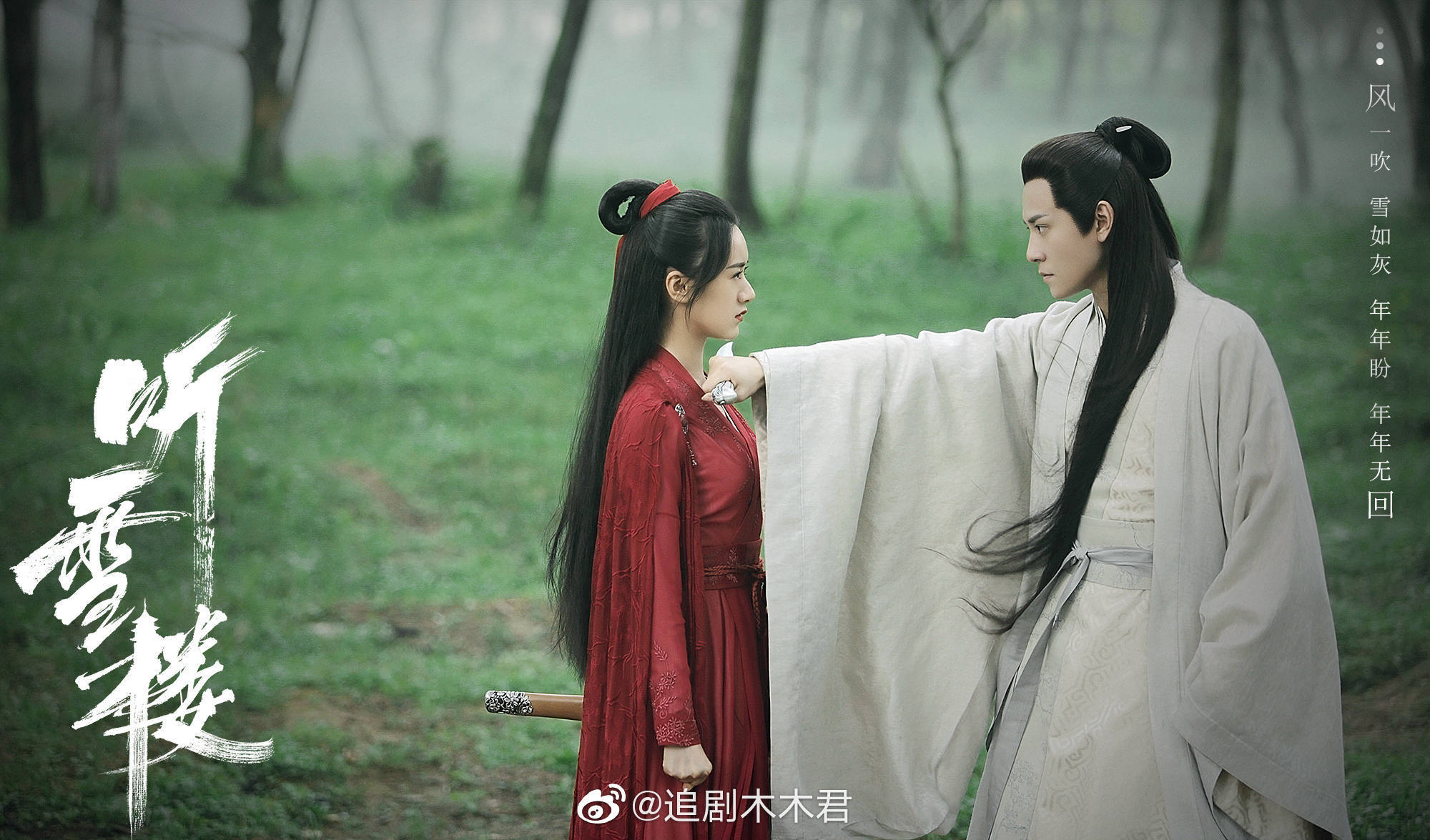 Anyway, I’m done with my rant. Those were really the only two things that bothered me about this drama. Other than that, everything else is great! The supporting characters, the storyline, and the martial arts were awesome! They’re the reason why I’ve kept up with the drama so far and why I’ll continue to watch this drama.

I find myself liking the supporting characters more so than the lead characters. I think they’re interesting and lively than the two leads. For example, I’m a Qing Yu and Xiao Tai shipper! They’re both adorable and charismatic characters and I hope to see more scenes with them together. I also quite like Zi Mo and Nan Chu, who are more quiet and reserved. While there’s not much scenes with them in it, I hope there will be more development for them. 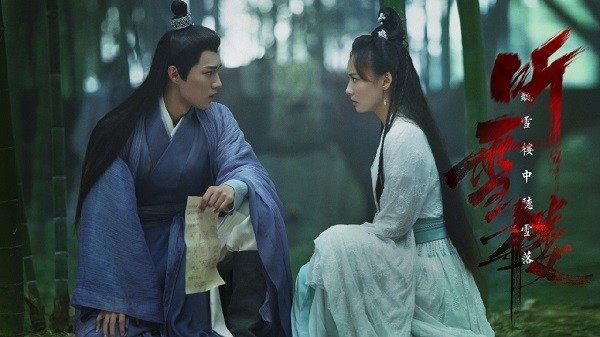 As for the storyline and the martial arts, it’s very good! The martial arts scenes are kind of a throw back to old-style wuxia dramas. It’s cool to see that people are still into this because it’s what is missing in lots of dramas nowadays. And, personally, it was one of the reasons why I loved watching wuxia dramas. So I never skip over the fight scenes! As for the storyline, I actually find it quite interesting and written pretty well. And it’s what helps me get through the drama without wanting to give up!

Overall, though I do like the drama. I do hope Shu Jing Rong stops relying on people to protect her and really start relying on herself. I want to see her grow up and start fighting. But with Yuan Bing Yan’s poor acting skills, I don’t have much hopes for Shu Jing Rong at all. Right now, I’m just watching to see the supporting characters and how they develop their story. It’s a good thing that they all get a good amount of screen time, so it helps keep my interested in the drama. For those who are watching this drama, please let me know what you think!