Any dream with Deng Lun would be sweet indeed.

The story seems innocent enough.
Ling Ling Qi, a kind-hearted girl, always had a crush on renowned florist, Bo Hai, and is determined to get closer to him by applying to work at his company, Flower Plus. One day, they both come across bracelets designed to promote better sleep by controlling brain waves. When they try them on, the devices malfunction and merge Ling Ling Qi’s brain waves with Bo Hai’s. Thus, Ling Ling Qi is transported into all of Bo Hai’s dreams where she helps him overcome some of his childhood traumas.

Land of dreams. You know what that means? Absolutely free reign. This is the dream realm. Literally anything can happen. Logic is out of the window. In my opinion, its the best possible scenario for an Asian drama. No holds barred. Ling Qi is a die hard fan of Bo Hai. Her antics on meeting him in her dreams rings so close to home. I mean, prove me wrong that any fan wouldn’t do the same. She literally drools over him and forces herself on him. Its a dream so no real world consequences. She is constantly trying to kiss him and occasionally saving him from a dragon. While Bo Hai is the prince of his dream land, it is Ling Qi who is his knight in shining armor. Its only fair she asks to be paid for saving the damsel in distress right? 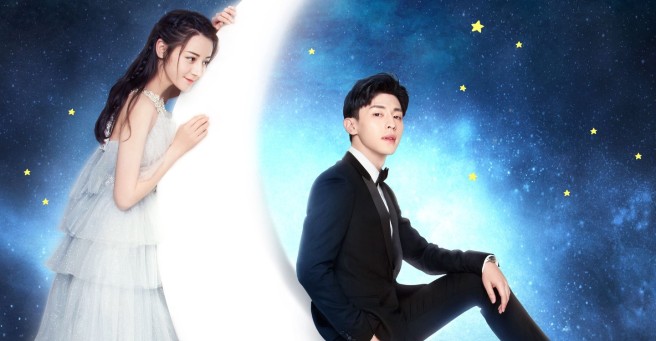 But thats the dream world. In the real world, Ling Qi is the furthest she could be from Bo Hai. She is a vet student but dreams of becoming a florist to get close to her celebrity crush. So far, in the first two episodes, they haven’t shown any inclination from Ling Qi towards genuine flower arrangement. Nor does she seem to have any training for the same. Maybe they will develop more on that later. But Dilaraba Dilmurat is adorable as Ling Qi. As one of the characters points out, she is adorkable. She is likable but somehow catching herself right on the verge of being annoying. She is ditzy and is constantly day dreaming. Why should you root for such a flaky protagonist you ask? Because she is well aware of her obsession. While she holds back in real life to some degree, her dreams are completely unrestrained. So much so that her family thinks she is nuts. She is unaware of why she keeps meeting Bo Hai and far as she is concerned, its her dream, so she can do as she pleases. She doesn’t know its the real Bo Hai. I think for an airy light show, they did a fairly good job of spelling out character motivations and limitations, or lack there of.

The show is funny. While Bo Hai doesnt have much a personality yet, Ling Qi is pretty much spelled out for you right from the beginning. Although she is cute and a little crazy, I really wish they expand on her personality more as the show goes on. The writing is very self aware and the show very wholeheartedly leans into its cliches and romantic comedy tropes. It knows its being ridiculous, might as well go all the way. The sound design is also great. I am not a fan of dubbing in Chinese dramas, but the music is great. Really cheery tracks suited to the whole feel of the show. The dream realm looks pretty good too. But I wish there visual cues as to show the difference between the dream realm and real life besides Bo Hao being in a European prince costume. It could be a stylistic choice of keeping the two same in the hopes of maybe combining the two later on. But even fantasy shows do a better job of separating the fantasy realm than the mortal world, whether its with the use of a different color palette or lighting. The CG in the show is very good. It looks refined and clear and expensive. I have only seen the dragon so far and I was really impressed. Chinese dramas are really stepping up in their special effects. The show also has emotes spread throughout, giving it an anime/manga esque feel.

The show is great so far. It has a lot of funny beats and completely embraces its own absurdness. Its interesting to see a florist CEO be the main character. I dont think I have ever seen a florist be a subject of a drama. I also really like the cartoonish stylistic choices and I hope they continue even when things get serious. Its also interesting to see the fire immortal from Ashes of Love have pyrophobia, of all things. While I did see people commenting on how Ling Qi’s interactions with Bo Hai verge on assault, I dont see any problem with it. She thinks she is dreaming. Any fan girl/boy would do the same. I am looking forward to seeing this drama more and am curious to see how they handle the emotionally heavy scenes with the crux of the show being a variety romantic comedy fantasy. The cast is very strong, especially the leads and it can only get better from here.

Published by Daena May

One step at a time. View all posts by Daena May