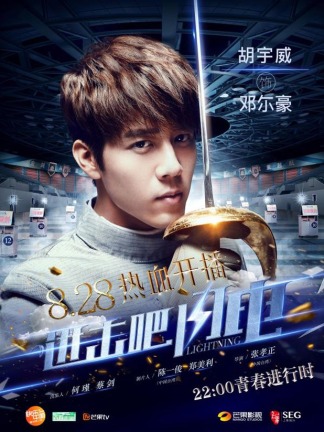 For some reason, I have a soft spot for Jiang Jin Fu after first watching him in Legend of Qin (not a great show and I didn’t finish it) and then the Adventure of Love. His appearance in Takes A Real Man S2 cemented it for me – appears to be brawn > brain but definitely with heart. Which is why I decided to watch this youth sports drama when it aired – I watched My Mr Mermaid too as I also have a soft spot for Tan Song Yun but even she couldn’t save that show for me and I gave up halfway.

Admittedly, I do not think that the character of Leng Zi Feng was much of a stretch for Jiang Jin Fu as it seems quite close to his real life persona but he did manage to execute it with such passion and grit that one couldn’t help cheering for him. It is your typical underdog-made-good story but the rousing themesong (GBoyswag) punctuated by the wistful sub-theme (Della Ting)and Zi Feng’s determination and perseverance made it an excellent feel-good drama to cap a day’s hard work at the office.

I initially had reservations about the female lead, Zhao Yi Hong, who I thought would be typical Mary-Sue pretty girl but Koala Chen did really well. Its an every-girl role but it was interpreted with sufficient youthful innocence and bravado without being cloying. The 2nd male lead, Deng Er Hao who was Zi Feng’s inspiration-turned rival-turned friend and 2nd female lead, Bai Wu Shuang, Zhao Yi Hong’s adopted sister/love rival rounded up the main quartet nicely. George Hu (my first time watching him – handsome dude!) as Er Hao was a nice counterpoint (achievement through hard work) to Zi Feng’s natural talent and while they had some rivalry (both professional and romantically – Er Hao is into Wu Shuang who was into Zi Feng) their friendship developed well – it was not unrealistically peachy and they were never bestest of friends but they spurred each other to do their best and their animosity was never overblown and sufficiently modulated to be realistic. Wu Shuang, too was a good character, definitely the slight martyr kind but not to the point that it was slappable – ultimately their sisterhood mattered the most and it was nice that each of the quartet had their own happy ending. I also liked how Yi Hong, despite being slightly selfish (and that is not fatal flaw just a personality trait)did not completely change her being by the end of the show but just grew up and matured organically.

I must make special mention to Wu Hao Ze who portrayed Shao Kang who started out as a fencer in a rival school but ultimately became good friends with both Er Hao and Zi Feng. He is definitely an egoist but a self aware one and it was rewarding to follow their journey to become friends although professional rivals. Although a side character, it was well developed and I think quite reflective or real life if we were to give people a chance and not jump to conclusions just because of perception or first impressions.

Its only 31 episodes so not too long and definitely a good pick-me-up. It could have done without the fake son storyline (which thankfully was only a few episodes towards the end and resolved nicely) but all-in-all, a thumbs up for me if one is in need of an uplifting, underdog story.

View all posts by lizzieyen